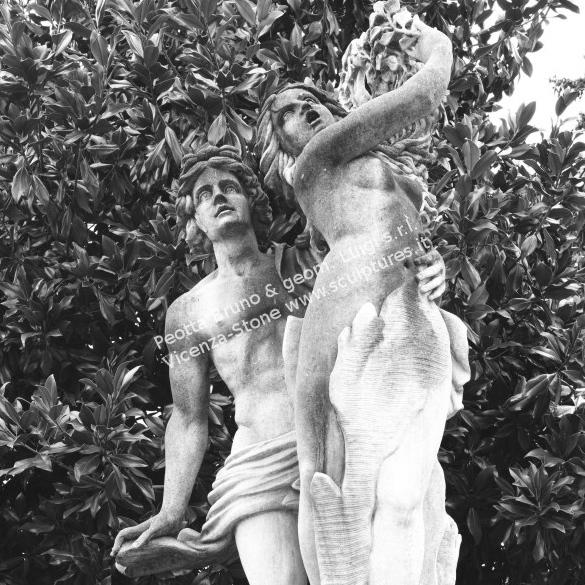 Great sculpture group in Vicenza stone. Handcarved by our sculptors here in our Firm.

The scene it is spectacular and terrible at the same time. Apollo is caught in the instant in which he is finishing his run, rendered with a dynamism hitherto unknown to the sculptural tradition; in fact, in the marble, the god has just managed to reach Daphne, and lightly grazes it with his left hand, perhaps with the intention of embracing her.

Apollo, whose body is treated by anatomically emphasizing the muscles and tendons stretched by the effort, incests placing all the weight on the right foot, firmly anchored to the ground, while the left leg is lifted upwards. The cloak is slipping away and swollen by the wind behind him; the hair, arranged in wavy hair and knotted, is moved backwards due to the rush of the race and its look presents an eruptive vitality, suggested by the thickness of the eyelids, the hollow iris and the raised pupil (which, in this way, it is the only one to be struck by light).

Daphne, to escape the undeserved embrace, flaunts his nakedness against his will, and fights for his virginity: to escape the grip of Apollo, in fact, the nymph suddenly brakes and arches the bust forward, so as to counterbalance the thrust of the god and continue the flight.

The lower part of the bust of Daphne, however, no longer responds to his will. The metamorphosis, in fact, as just begun: the left foot has already lost every human aspect, becoming root, and the same is happening to the right, that the unfortunate nymph tries in vain to lift but that instead is anchored to the ground by some cylindrical appendages that grow from the nails and which will later form the root system of the laurel plant. For the same process, the bark is progressively wrapping its graceful body, while its hands, turned to the sky with open palms, are already becoming laurel twigs.

The face of Daphne, characterized by the half-open mouth, reveals contrasting emotions: terror, having just been reached by Apollo, but also relief, because he is aware of the metamorphosis just begun and that, therefore, Father Peneo has managed to fulfill his desire .

On the other hand, Apollo's gaze shows a painful, stupefied disappointment. The pathos of the scene is emphasized not only by the physical and psychological dynamism of Apollo and Daphne, but also by the alternation of fullness and emptiness.

From the play of light and shade, and from the attention to the rendering of the differently treated surfaces, so as to be able to imitate in the same marble material the roughness of the bark, the rocky consistency of the ground, the softness of the face of Daphne and the harsh freshness of the foliage.

Remarkable also the perfect balance of the parts of the work, which extend in space without compromising the balance, according to a game of approaches and detachments. This is how the work, set on the two arches described by Apollo and Daphne, admirably returns a feeling of harmony, also due to the comparison that Bernini made with the Hellenistic statuary, especially with the Belvedere Apollo.