Founded a century ago by Gelindo Peotta, who passed on to his son Bruno the fundamental principles of the stonecutter's art, the 'Laboratorio di Scultura e Architettura Peotta' has been working this natural material for four generations.
Thanks to their skill in producing statues and artistic works of exceptional quality, over the years the craftsmen of the Peotta workshop have gained fame at international level, and each piece of sculpture produced bears witness to the artisans' dedication to their profession and the traditions of the sculptor's art.
The pieces of sculpture produced at the Laboratorio Peotta, now managed by Luigi Peotta and his sons, Mattia and Michele, can be viewed in the firm's catalogue, which contains no less than 2,500 handcrafted articles. The workshop also produces refined and innovative artistic work for internal and external architectural decoration. 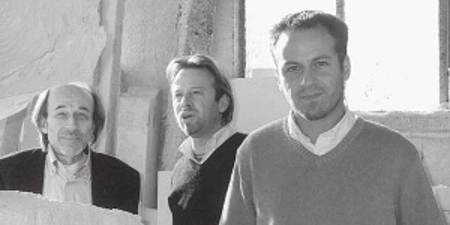 From the left: Mr. Luigi, Mattia and Michele Peotta 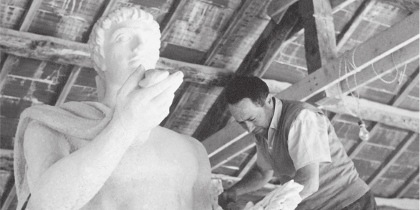