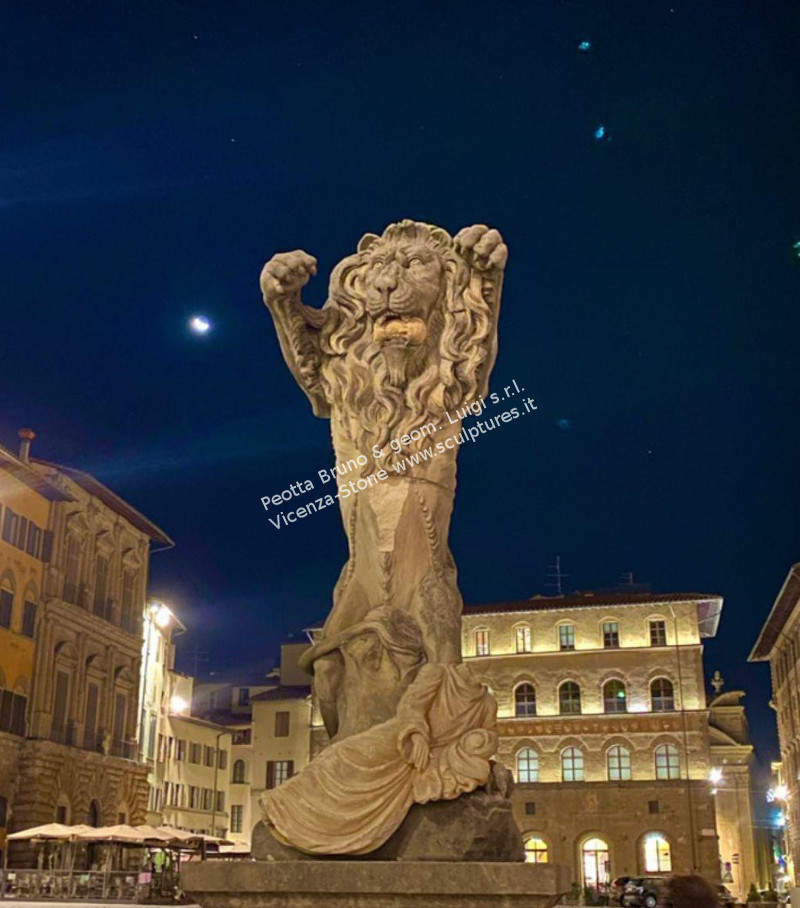 With two new sculptures in Piazza della Signoria and in Palazzo Vecchio, from 2 October 2021 Francesco Vezzoli will be the protagonist of Francesco Vezzoli in Florence, curated by Cristiana Perrella and Sergio Risaliti.

The project - presented by the Museo Novecento in Florence and by the Luigi Pecci Center for Contemporary Art in Prato, created with the patronage of the Municipality of Florence and the organization of Mus.e - brings contemporary art and the city's historical and artistic heritage into dialogue .

It has been placed in Piazza della Signoria, the PIETÀ (2021) sculpture, created by Francesco Vezzoli in collaboration with Peotta Bruno e geom. Luigi, a monumental twentieth-century rampant lion installed on an ancient base, which crushes a Roman head of the second century AD in its jaws.
(Overall dimensions: Cm. 510 x 180 x 180).

Francesco Vezzoli is the first living Italian artist to create a site-specific work for Piazza della Signoria, specially designed for the occasion.

Furthermore, the project includes a second sculpture, LA MUSA DELL’ARCHEOLOGIA PIANGE (2021), located inside the Studiolo of Francesco I de 'Medici in Palazzo Vecchio.

With these works, Francesco Vezzoli returns new disquieting muses, recomposing the fragments of a lost civilization, remembering that art is always, first of all, a mental fact and that ready-mades, ancient-modern assemblages, are a practice with very ancient roots.

It was an honor for Peotta Bruno & geom. Luigi, to collaborate with Francesco Vezzoli for the realization of this important monumental work.

Francesco Vezzoli was born in 1971 in Brescia. He studied at Central St. Martin's School of Art in London, currently lives and works in Milan. Today he is one of the most successful contemporary Italian artists in the world, his work can be described as a series of strong allegories about contemporary culture with a rich subtext of elaborate references, made through video installations, small stitch embroidery, photography, performance live, experiments with the use of media and - more recently - classical or ancient-inspired sculpture.

His works have been selected four times for the Venice Biennale: for the 49th, 51st and 52nd editions which were held respectively in 2001, 2005 and 2007, and the 2014 Architecture Biennale. His works have been included. also in other international exhibitions such as the 2006 Whitney Biennial, the 26th Sao Paulo Biennial, the 6th Istanbul International Biennial and Performa (in 2007 and 2015).

His work has been presented in various venues including the Solomon R. Guggenheim Museum in New York, the Metropolitan Museum of Art in New York, the Whitechapel Art Gallery in London, the Grand Palais in Paris, the Museo del Novecento in Milan. , Palazzo Grassi in Venice, Fabric Workshop and Museum in Philadelphia, the Witte de With Center for Contemporary Art in Rotterdam, the Migros Museum in Zurich, the Neues Museum in Weimar, the Pirelli Hangar Bicocca in Milan, the Musée National Picasso in Paris.